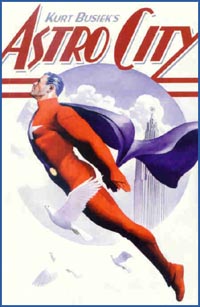 Astro City: Life in the Big City
by Kurt Busiek and Brent Anderson

Astro City is a dangerous wonderland of comic-book logic.  Men and women fly through the air.  The evening news is cluttered with reports of alien invasions — some substantiated, others just rumor.  The residents are regularly kidnapped by would-be tyrants and reduced to piles of smoking ash by cosmic menaces.  In a city where every other building disguies the eighth (or ninth or tenth ...) wonder of the world, ordinary people have a tough time clinging to sanity — let alone building meaningful, worthwhile lives.

But hey, that's Life in the Big City.  You get used to it and you find meaning where you can.

If you've never read Kurt Busiek's ground-breaking series about ordinary people in an extraordinary world, here's your chance.  Pick up a copy for only $19.95 at Heroes and Dragons — $15.96 for Comic Club members — and join us on July 10 for a round-table discussion.

Remember:  We're meeting one week later than usual in July because of the Independence Day holiday!

Previous Comics of the Month: