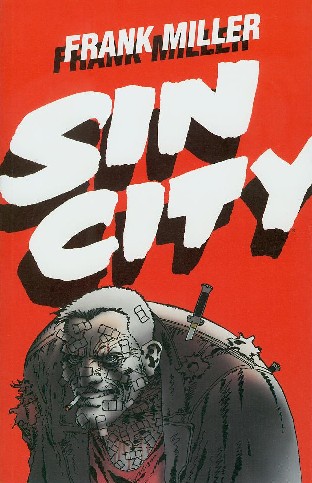 Last month, Comic Club soared among the heroes and legends of Astro City.  This month we come back to earth, with a very different fictional destination.

Sin City is a vicious town, hot and unforgiving during the summer.  It offers no comfort or succor to its residents, only a faint hope for survival — and in some cases, survival is worse than the alternative.

Into this world of commonplace brutality, Frank Miller introduces Marv — as calloused and jaded as the City itself, until a chance meeting with a damned woman gives him purpose.  It may be a stupid, wrong-headed purpose (as Marv admits), but it's the only thing he ever had to live for in Sin City.  And a lot of other people will die because of it.

Told in stark black-and-white, Sin City is a punch in the gut to modern comics readers.  There are no inspirational moments or happy endings here — only a relentless brutality that somehow manages to affirm the value of life.

Read this ground-breaking graphic novel and tell us what you think.  It will be the subject of discussion at the next monthly meeting of H&D Comic Club — on Thursday, August 7.  Regular price is $19.95, but Comic Club members will save 20%, just as they do with every graphic novel purchase.

Previous Comics of the Month: